realme Malaysia Ending 2020 With Record-Breaking Note!| realme Malaysia had the first sale for its recently-launched realme Smart TV during the Super Brand Day from 22nd to 24th of December on Shopee.

“We are beyond thankful for the support from realme fans, you have made realme a new record holder again!

We have just leapt into the home industry within a month and it is a great recognition that motivates us to work even harder and bring more attractive deals as well as devices to our fans in Malaysia.

Here at realme Malaysia, we would also like to wish everyone a Happy New Year and let’s look forward to a bigger, better and exciting 2021,”

Today, realme is proud to announce that realme Smart TV broke the record of television category as it was being sold the most in Single Day on Shopee. 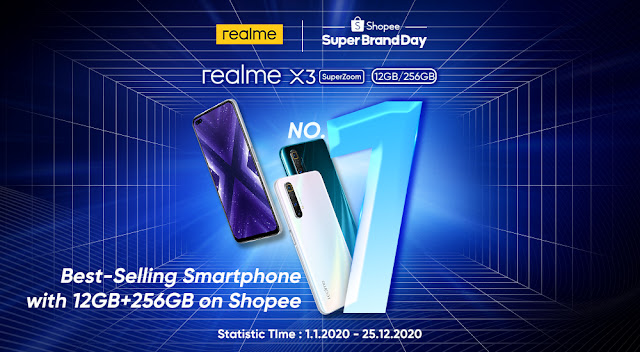 Apart from the realme Smart TV, realme X3 SuperZoom was also crowned as No. 1 Best-Selling 12GB+256GB Smartphone in Shopee as of 1st of January 2020 until 25th December 2020.
The unconditional love of realme fans towards the flagship experience provided by realme X3 SuperZoom was reflected in the sales achievement twice.
This resulted in the device being ranked as No.1 Fastest Selling Snapdragon 855+ Smartphone on Lazada during the Double 12 sales in realme Malaysia

To find out more about our events and promotions, do follow

For any collaboration or invitation on Entertainment, Food, Travel or Event /Product Launching & Review, do email to kitepunye2018@gmail.com

Nannie Isa.
Mummy of 2 boy and girl .
Family of October.
cats, eating travelling and of coz to meet new friends.
A blog about lifestyle since 2010
Any food review, product review or event feel free to email me kitepunye2018[@]gmail.com